A young male falcon that fledged from Salisbury Cathedral Tower in 2020 has been spotted on the coast of Guernsey, just over 100 miles away from his birth city.

Osmund, the only male of four chicks reared on the Cathedral Tower two years ago, was identified by his blue colour ring that bears the initials YK. Peregrines are known for travelling great distances and in this case, Osmund has crossed a large body of water, probably in search of his own territory and a mate. Now in his full adult plumage, he is ready for breeding. Some peregrines do mate in the first year, but most start breeding as two-year-olds.

Ed Drewitt, the British Trust for Ornithology ringer, gave Osmund his blue ring as a 3-week chick on the Cathedral Tower, assisted by Phil Sheldrake, the Cathedral’s Nature Conservation Adviser. Reporting the sighting to the Cathedra’s peregrine team, he said:

“This is a first! Some Cornish peregrines have reached the French coast. However, I don’t know of any other colour-ringed birds, particularly from my area which includes Wiltshire and Avon, flying to the Channel Islands.”

Osmund was the first of the 2020 chicks to fledge. He and his three female siblings (Ela, Katherine and Honor) were named after individuals who played a significant role in the Cathedral’s early history to mark the 800th Anniversary of the Cathedral’s foundation. Seven hundred people took part in the public vote. Osmund’s namesake, St. Osmund, was the first Bishop of Salisbury and built the original Cathedral at Old Sarum, completed in 1092. He was made a saint in 1457, four hundred years after his death.

Only two other peregrines have been spotted since fledging from the Cathedral Tower. Hardly a surprise given that over half of the peregrines that fledge annually do not survive their first year and they are, despite being listed under Schedule 1 of The Wildlife and Countryside Act 1981, still persecuted. Peter (Blue ring GX), one of the first chicks to hatch on the South Balcony in 2014, was shot and injured near Stockbridge in March 2017 and nursed for 2½ months to by the Hawk Conservancy Trust before being released back into the wild. He has since been nesting with his mate in a Hampshire quarry and has successfully fledged his own chicks. The other peregrine spotted away from home is Aveline (Blue ring SC), a female that fledged from the Tower in 2016. She was spotted in Flood Plain Nature Reserve, Milton Keynes in January 2017. 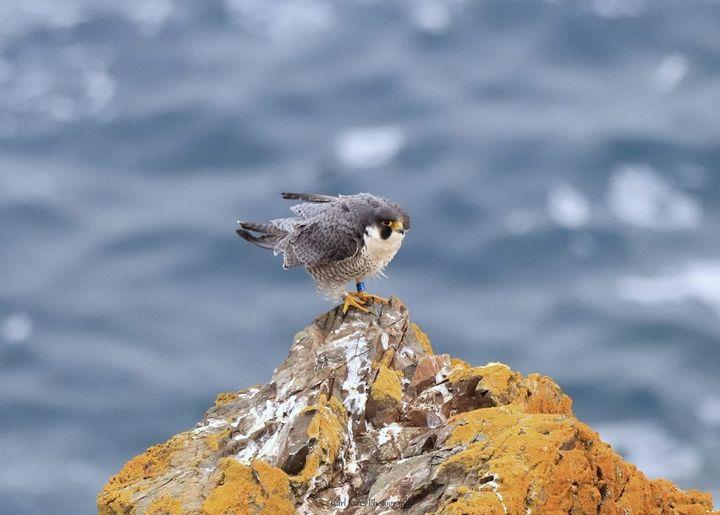