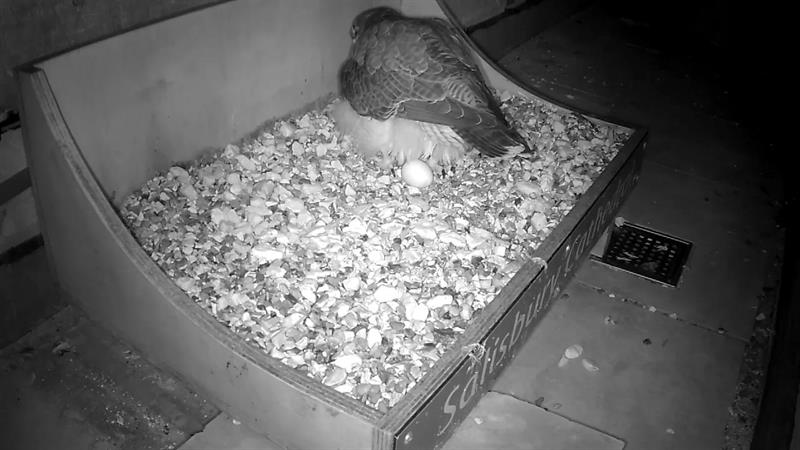 The female stayed with the egg overnight, taking a break at just after 06.00 when her mate came in and took over. The pair won’t start incubating the egg yet, but they will sit on the egg for brief periods.

Incubation will begin in earnest after she has laid a full clutch (usually around 3 or 4 eggs). Eggs are generally laid at 2-3 day intervals. Once the female has laid her full clutch, she will sit on the eggs for 29-30 days before they hatch, which hopefully means chicks in late April.

All good news for the youngsters at St Martin’s Primary School Salisbury and Shrewton Primary School, who are trialing the cathedral's education team’s peregrine lesson plans. There should be lots for the children to do and learn this Spring

Salisbury Cathedral has an historic bond with peregrines, which was broken in the twentieth century because of persecution and pesticides. There were nine fully authenticated sightings between 1864 and 1953, details of which are held in the Wiltshire archive. However, a long period of absence followed, from 1953 until 2014 when a pair bred successful on the South side Tower balcony. Three peregrine chicks were hatched, ringed and fledged from the base of Salisbury Cathedral’s spire that year and a further four in 2015. In 2016 two peregrines out of a clutch of four survived and fledged and in 2017 only one chick hatched but was joined by an orphaned chick after a few weeks. Both birds successfully fledged. There were no chicks on the Tower in 2018.